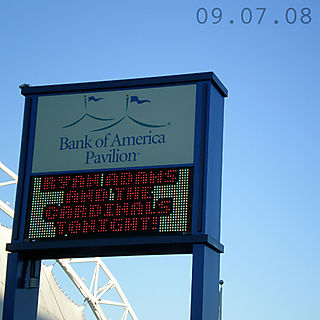 Reviewer: I am Hydrogen - favoritefavoritefavoritefavorite - September 26, 2008
Subject: Perfect AUD?
This very well may be the perfect AUD recording. It offers the sense of being "there" that a SBD just can't touch, without the degradation of sound sometimes experienced. And, yet again, the Cardinals kill it. For anyone interested, the Boston Globe reviewed this show here:

Reviewer: Henry Parsons - favoritefavoritefavorite - September 10, 2008
Subject: sounds good.....
I bet all the uber hipster douche bags were going nuts with all the hooting and hollering. Ryan and Co. didn't seem to mind. It's about time it sounded like a rock and roll show and not a fucking lame ass sit down crowd whispering type thing that so many seem to enjoy. Boston seems to get great shows.

This was the 1st time I've seen Ryan. I bought the tix on a whim, since I knew he was an artist I really should check out. Plus, I hadn't been to the BoA Pavillion in years and it is a beautiful venue. I debated going to My Morning Jacket, who played the night before, but am so glad I picked this one. MMJ played under the remnants of hurricane Hanna.

In preparing for the show, I listened to the Somerville Theater show (also found here) and liked it, but I really liked the electric show much better. I'm in the same (electric) camp when it comes to Neil Young, who I saw acoustic/electric at the end of last year.

Ryan commented a couple of times about how beautiful it was and said that this was one of the most "fun" shows they've done. You be the judge... BTW, there is at least one other recording, but this one sounded very good in the streams.

You've got all the songs in the correct order, just the names embedded in these three are mixed up.

if the Cardinals are still to be considered a "fledgling band", then fans of Ryan Adams and his Cardinals are in for MANY amazing live musical moments in the years to come.

this Boston show was ELECTRIC...both literally and figuratively. the band plugged in, and revamped a LOT of OLD classics (and new ones), and soft-acoustic ballads were treated with a hyped-up/jammed-out, electric flavor.

they've reworked the tempo, chord-progressions, and overall structure of some of the songs you see on that setlist above, and they've done it SO successfully.

I've been a Ryan Adams fan from the get-go, I listen to his music religiously, and I couldn't immediately recognize many of this show's performances from the opening notes (due to these new-ish rock'n'roll re-arrangements), knowing what was played only when RA opened his mouth to sing.

his voice sounds better than it ever has...his banter between songs is hysterical ("this song is dedicated to Princess Leia"..."here's one we wrote back in 1947", etc), and the band sounds tighter than ever.

I saw his last MA performance at the Somerville Theater, and this BOA Pavillion performance was a FAR departure from the acoustic-bliss that fueled his last stand here in Beantown. I was most impressed with the band's obvious ability and penchant to fucking "JAM" .

though there were no segues, many of the solo(s)/instrumental sections within the songs were stretched out and completely given a beautiful-chaotic, electric-improv-treatment (see: Easy Plateau for a great example of such)...and, again, this treatment was executed with the utmost of success and beauty; impressive in the level of cohesiveness and loose energy that the band so obviously has.

this band hasn't been around for THAT long, and that's a wonderful thing. if they keep on keepin' on in the direction they're headed in (and if RA stays 'happy & healthy'), they're primed to take a position of live musical success and touring that even I (being the fanboy that I am) am very impressed with, also surprised at.

moments throughout this show reminded me of OLD, early, live Grateful Dead recordings...with that RAW, almost uncontainable drive and style that comes from playing such genuine and heartfelt music with real-care and easy-control and, most of all, excited enthusiasm.

it was great to hear a lot of OLD hits a'la "Gold" and "Heartbreaker". I didn't expect that, and it was a welcome surprise to hear some 'oldies'.

the new songs were as good as anything else that RA writes -- 'Sinking Ship' being my fave of the four(?) that were played.

over and out,
anarchy747